History was made at the Harrisburg State Capitol during the conference! The largest Music Therapy Hill Day in the country took place with well over 200 music therapists and music therapy students from across the region storming the Capitol. This event was coordinated with the yearly Student Service Project. Music therapy students and professionals attended a training Wednesday evening and visited the Capitol Thursday morning. While at the Capitol, some students led a rhythm circle to draw awareness to the cause while other students and professionals made legislative visits asking for support for PA HB1438 and SB 947. Check out this video about the experience by a Radford University student. Many thanks to ALL the individuals who assisted in planning this event: the PASTF, the MAR Conference Planners, the local committee, and the various student groups. This event was possible because of the tremendous teamwork from all! 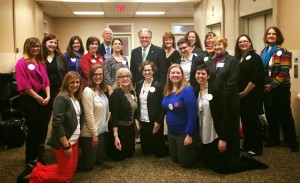 Other conference highlights included an advocacy breakfast Friday morning for legislators and leaders in music therapy advocacy across the mid-state. PA HB 1438 Sponsor Eddie Day Pashinski rallied the group, representatives from Masonic Village spoke about advocacy within their agency, and Nancy Thaler, the Deputy Secretary of the PA Office of Developmental Programs (ODP) attended the event. 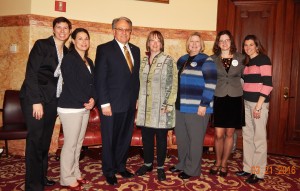 The conference also provided the 6 active MAR task forces in the region to gather in person and share ideas, stories, strategies, and information amongst themselves as well as with music therapists in their states. Many thanks to all the task force members in MAR for all their hard work, dedication, and service to increase access to services for our clients! One of the challenges the group identified in their work was how to engage the music therapists in their states with their work. Please assist the task force by responding and educating yourself about the work they are doing in your state. The task forces want to hear your voice to best represent your professional needs and the needs of the clients you serve.

There is interest in beginning a task force in DE. We are looking to begin this work sometime in June. If you are interested in becoming involved please contact Maria Hricko Fay at margovernmentrelations@gmail.com

This summer the MDSTF would like to hold an advocacy training with legislative visits in the legislators home districts. This event will be geared for both professionals and music therapy students from MD and will be held in the summer to accommodate the students. CMTE’s will be offered for professionals. Be on the look-out for more information regarding this soon! The task force would like to thank Anne Lipe for her service to the task force as she steps down.

The Music Therapist Licensing Act (Assembly Bill A783) was heard by the Assembly Regulated Professions Committee on February 4, 2016 and was successfully released by unanimous vote from the committee to the General Assembly. Thank you, Paula Unsal, for testifying on behalf of NJ music therapists and for representing them so well! For more information about this event please click here. Newly elected Assemblyman R. Bruce Land also joined A783 as a Primary Sponsor. The task force is communicating with speech and language pathologist representatives regarding concerns expressed in the February hearing. The Music Therapy Licensing Act (Senate Bill 1601) was reintroduced in the Senate on February 16, 2016. Follow these bills here.

NJSTF is asking NJ music therapists and music therapy students to submit photos and videos of their work that may be shared on social media and in legislative presentation. These will be used to compile a video to share with legislators to learn about music therapy in New Jersey.

Follow other creative arts bills in NJ! The Drama and Dance/Movement Therapists Licensing Bill has been introduced in the 2016/17 session as Assembly bill A2477.

The NJSTF would like to thank Gillian Zambor for her service to the task force. Gillian has moved out of state and Amanda Latham has filled the vacant position. Best wishes Gillian and welcome Amanda!

The NYSTF, along with members from the national AMTA/CBMT team, visited two more universities on its “NYSTF School Tour.” On February 21, 2016 the task force, visited New York University to update students and professionals on the LCAT and to begin a discussion about a true, authentic license in NY. On April 3, 2016 the task force presented at SUNY Fredonia. Thanks to the NYSTF for their dedication in educating New York Music Therapists. Look for the NYSTF to visit a New York school close to you: Nazareth College on Saturday, September 24, 2016 and Molloy College on Friday, October 21, 2016. CMTE’s are offered at a reasonable cost and you can earn credits in ethics! 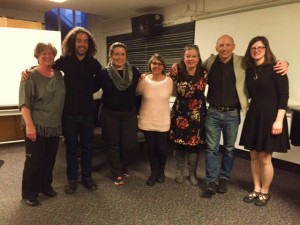 On April 13, 2016 task force member Beth McLaughlin attended and participated in an Autism Advocacy Event in Albany hosted by Assemblyman Santabarbara. This event provided the opportunity to connect with potential sponsors for a music therapy bill in NY while also educating and advocating for music therapy in the state.

The NYSTF continues to follow issues related to Medicaid regulations as well as other concerns related to reimbursement and the provision of music therapy services in New York. The NYSTF has created an extension of the task force that will concentrate exclusively on these issues. The MAR Board approved by vote the creation of the NYSTF sub-committee: The NYSTF Reimbursement Team. If you are experiencing issues or concerns related to this issue, please contact the task force.

At the January 11, 2016 meeting, the Professional Practice Committee of the Board of Regents recommended that proposed rules for continuing education requirements for LCAT’s be added to the regulations as written. It is scheduled to be enacted January 1, 2017. You can read the PPC meeting report here and review the full document as submitted to them, including a summary of public comments and the Department responses, here. Thank you to all who responded to this call to action. The task force is currently in discussion regarding the draft application for approved providers of continuing education. If you are an LCAT, these new rules require continuing education for your LCAT. It is VERY important to stay abreast of new these changes.

Very recently, the task force received a message from David Hamilton, Executive Secretary of the NY State Board for Mental Health Practitioners, requesting feedback from NY Music Therapists regarding possible legislation that would require fingerprinting and background checks for licensed mental health practitioners. Very quickly, the task force compiled a survey for NY Music Therapists requesting input. If you took part in this survey, THANK YOU! It is presumed that legislation will be drafted for this. Keep updated!

The NYSTF presented a concurrent session at the regional conference in Harrisburg entitled, The State of Music Therapy in New York State. The task force provides many opportunities such as this to share information and to provide the opportunity to discuss recent changes and upcoming efforts for the recognition of music therapy in NY.

Click here for another way to stay informed about the LCAT: Hey, New York!!!! Did You Know???? SUPERVISION THE NYS WAY, OR THE HIGHWAY.

The PASTF held its fourth successful Hill Day event at the conference in Harrisburg. Participants met with legislators (Wednesday) and staffers (Thursday morning) to request support for the proposed music therapy licensure bills (HB 1438 & SB 947) and to garner support for the Informational Hearing that was scheduled Tuesday, March 22, 2016. At the March 22nd hearing, Judy Simpson, AMTA Director of Government Relations, Nicole Hahna and Melanie Walborn, PASTF Co-Chairs, testified along with parents and other professionals at this hearing. There was also testimony of opposition for the bill from the PA Speech-Language-Hearing Association, PA Association for Marriage and Family Therapy, and PA Occupational Therapy Association. This opposition is similar to those heard in other states that have attained state recognition. The task force is working to strategize on how best respond to each group and is working closely with Primary Sponsor Representative Eddie Day Pashinski.

If you are a resident of PA, stay connected to the task force through the monthly E-Newsletter by signing-up here. You can also “like” the PA Task Force on FB to receive updates on our advocacy work in PA. For more information or questions contact:  pastate.task.force@gmail.com

On February 27, 2016 this newly “re-formed” task force met in person with AMTA Director of Government Relations, Judy Simpson in Middelburg, VA at A Place to Be. Many thanks to Tom Sweitzer for hosting! Tom also continues to meet with Senator Jill Vogel who has expressed interest in supporting music therapy in VA. The task force is looking to connect with music therapists in the state to keep them informed. They have created a Blog, Facebook page, and Twitter account. Stay tuned for the “unveiling” of these platforms to stay connected to the work the task force is doing. The task force will also be updating the state fact sheet. VA Music Therapists, PLEASE respond to the task force survey when it hits your inbox. This information is critical to give state legislators an accurate account of music therapy/music therapists in VA.

Senator Unger introduced Senate Bill 680 establishing a Board of Music Therapy, which was introduced on Monday, Feb 22, 2016. This bill was referred to the Senate Committee on Government Organization. The bill did not proceed this year since it did not pass out of the Senate by March 2, 2016. Even though it will not move forward this year, this is a step forward that will prompt further discussion and raise a deeper level of awareness of music therapy in West Virginia legislature. The task force is currently working on submitting a Sunrise Review. For more information please contact: WestVirginiaSTF@gmail.com

MAR-AMTA ·
@MARAMTA
The MAR-AMTA Call for Papers for the 2023 Conference in Niagara Falls is STILL OPEN! You have until 11:59pm on October 1st to submit your proposal!