DELEWARE
DE & SPED – Patricia J. Gonzalez, MMT, MT-BC has been working on gathering information about SPED to work with Representative Melanie George Smith, to develop a recommendation that music therapy be included in a new state model for delivering services and education to children with special needs.
There is interest in beginning a task force in DE. If you are interested in becoming involved please contact Maria Hricko Fay at margovernmentrelations@gmail.com
MDSTF (Chair – Niki Runge and Tatyana Martin)
Click here to see the task force update.
For more information contact: mdstate.task.force@gmail.com

NJSTF (Chair – Paula Unsal)
NJ Assembly Bill A4353 – The Music Therapist Licensing Act was heard by the Assembly Regulated Professions Committee on December 10, 2015 and was successfully released by vote from the committee to the General Assembly. Congratulations New Jersey on a successful hearing! Click here to read and see more about the success from the hearing.

Assembly Bill A4353 language amendments to acknowledge social workers and requested language change regarding proposed Advisory Committee compensation were considered in the Regulated Professions Committee vote. In addition a speech and language representative spoke at the hearing to register their intention to discuss the bill language. The bill sponsor will meet with S&L to determine their concerns.
The New Jersey Legislative 2015-2016 session ended on January 11, 2016 without further action on A4353. This bill was reintroduced to the Assembly on January 12, 2016 and is now known as Assembly Bill A783 in the 2016-2017 session. The bill retains all of its sponsors except for Assemblyman Gilbert Wilson who did not run for re-election in 2015. It is expected to be re-assigned to the Regulated Professions Committee when the Assembly committees are announced for the new session.
Senate Bill 2971 is expected to be re-introduced as well in the 2016-2017 session. Look for updates from the task force and on the MAR Website for updates.

In order to educate legislators and the general public about music therapy in NJ, the NJSTF has issued an ongoing Call to Action to NJ Music Therapists and Music Therapy Students to submit photos and videos that may be shared on social media and in a legislative presentation. Take 10 for Music Therapy Advocacy!
Other NJ creative arts news: The Art Therapist Licensing Act successfully passed in both houses and was formally approved on January 11, 2016. It is now New Jersey P.L. 2015, c.199. The Drama and Dance/Movement Therapists also had a licensing act introduced in the last session as Assembly Bill A4582. They hope to get this bill re-introduced in the current session.
For more information contact:  newjerseytaskforce@gmail.com

PASTF (Co-Chairs – Nicole Hahna, and Melanie Walborn)
The PASTF held its third successful Hill Day this past October. Participants met with 55 legislators and staffers to request support for the proposed music therapy licensure bills (HB 1438 & SB 947). As a result of these meetings, they had several legislators co-sponsor this legislation/or provide verbal support. 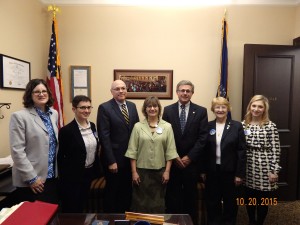 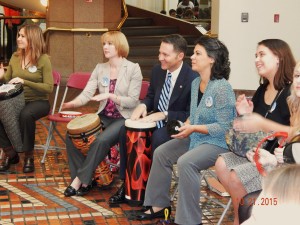 Directly after the PA Hill Day in October, task force members Nicole Hahna and Michelle Muth met personally with Nancy Thaler, the Deputy Secretary of the PA Office of Developmental Programs (ODP). The PASTF has been working with (ODP) on revisions to the Consolidated and Person/Family Directed Support (P/FDS) Waiver to add music therapy into the waiver language. The task force has been working with the national team creating and reviewing draft language to submit.

The PASTF is taking advantage of the regional conference being held in Harrisburg and would like to storm the PA State Capital with music therapists and students to show support for HB 1438 and SB 947!

Two FREE CMTE advocacy events are being held at the conference:

ADVOCACY EVENT # 2
Wednesday evening March 16, 2016, the task force will provide an Advocacy Training with Hill Day visits on Thursday morning. The Hill Day visits will most likely be with STAFF (not legislators) . This event also includes the student service project with students being involved in meetings and a drum circle in the Capitol.

PLEASE CHECK THE MAR WEBSITE FOR UPDATES ON THESE EVENTS and Take 10 for Music Therapy Advocacy in PA!

Congratulations Melanie Walborn and Nicole Hahna for receiving the 2015 Change Maker Award at the National Conference in Kansas City, MO! This award is a testament to the incredible work they are doing in PA to increase access to music therapy services. Well done!!! 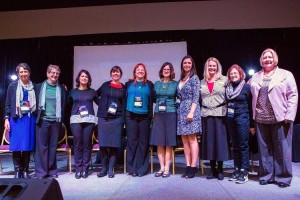 If you are a resident of PA, stay connected to the task force through the monthly E-Newsletter by signing-up here. You can also “like” the PA Task Force on FB to receive updates on our advocacy work in PA.

VASTF (Chair- Briana Priester)
The task force continues to research the state regulations to see if any language needs to be updated, changed, or added.
The task force will be updating the state fact sheet. VA Music Therapists, PLEASE respond to the task force survey when it hits your inbox. This information is critical to give state legislators an accurate account of music therapy/music therapists in VA.
Task force member Tom Sweitzer continues to meet with Senator Jill Vogel who has expressed interest in supporting music therapy in VA.
For more information contact: vastfmt@gmail.com

WVSTF (Chair – Amy Rodgers Smith)
WV recently has had some very productive meetings with legislators. There is the possibility of bill introduction this year! Be on the look-out for forthcoming news!
For more information please contact: WestVirginiaSTF@gmail.com

MAR-AMTA ·
@MARAMTA
We are looking for people or businesses to Exhibit, Sponsor, or Donate door prizes for our MAR-AMTA conference on March 9th-11th in Niagara Falls, NY!