Donna Polen, Chair of the New York State Task Force (NYSTF) and members of NYSTF came to Montclair State University in September at the invitation of Brian Abrams, Associate Professor at the Cali School of Music.

NYSTF presented a workshop regarding the License for Creative Arts Therapist (LCAT) which is important information for New Jersey music therapists and music therapy students who are interested in working in nearby New York State.

In addition to discussion of the LCAT, NYSTF talked about the current bills in New York A4272 and S3386 for licensure of New York music therapists and how a music therapist licensure would be different from the LCAT.

As Chair of the New Jersey State Task Force (NJSTF), Paula Unsal, MM, MA, MT-BC shown here with Donna Polen, attended the workshop and was invited to speak about the status of the combined New Jersey bill for licensure of music therapists, A2183/S1687. 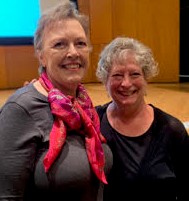 NJSTF has been waiting for a legislative vote on accepting New Jersey Governor Phil Murphy’s proposed State Board of Creative Arts Therapies before being able to move ahead with the combined licensing bill A2183/S1687 or some amended form of that bill.

NJSTF member Virginia Eulacio Cierniak, MA, MT-BC and Brian Abrams, PhD, MT-BC, LCAT as host of the workshop and consulting member of NJSTF joined Paula Unsal in a photo after the workshop. 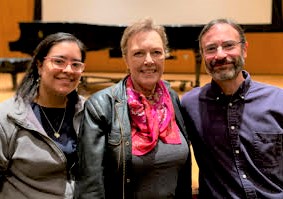