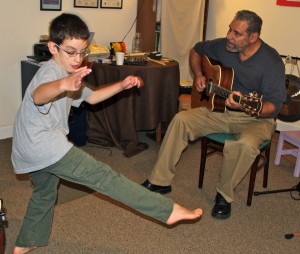 I originally wanted to be an original singer/songwriter such as Bruce Springsteen or Tom Petty but after trying for 15 years or so, I wasn’t doing as well as I’d hoped. I was making a living but I began to fear I was in danger of becoming a hack; an aging bar and wedding singer. But what else could I do?

When I first heard about music therapy, I thought it would, at most, become an adjunct to my performing work. But with my dream of becoming an original artist like the ones who had moved me so much growing up, yet feeling like just another wannabe in the clubs, I was always living for “someday.” “Someday my music will mean something to people,” “Someday I’ll be somebody.” I remember thinking that music therapy was my way out of “someday.” I couldn’t stand to wait for “someday” anymore. I needed to make a more substantial contribution right now. A second thought I had around this time was, “the music in music therapy was primarily for the healing benefit of others, not for the fulfillment of my own ego desires.” It was these two thoughts combined: “to make a contribution right now,” and “the healing of others through music taking precedence over my own self-aggrandizement,” that propelled everything forward and shifted the entire direction and focus of my life.

My training was the master’s program at NYU and later, I was invited to become the 3rd person to take the N-R certification training as a guitarist. N-R has been enormously influential to me. I have never focused on one population. I’ve worked with almost every type of person from baby to geriatric. My love is trying to find a way to make music with my client. It’s always new. I have been doing it for 25 years and still love it as ever. I also teach students at SUNY New Paltz and I love being in the position to mentor them.

Read all you can, find a style that works for you and focus on the music. From what I’ve heard music therapy has a high “burnout” rate. I guess people get disillusioned. I’ve always thought “burnout,” in music therapists stems from an over-emphasis on the nurturing aspects or other non-musical aspects of the job and an under-emphasis on musical interaction. Whether this is due to job structure or the therapist’s own insecurities with their musical selves, it is always the music that will renew, uplift and fulfill us. One can only be so nurturing with extremely difficult, needy or troubled clients before one burns out, unless one can find a way to relate positively. Many of my friends and family members have asked me how I deal with so much difficulty and tragedy in the lives of the clients I’ve worked with over the years. The short answer is: I don’t focus on that. I focus

on how to make music with this person. While that can sometimes be a struggle too, when we get there, it is always a joy. Music brings it all together, the suffering, the hope, the despair, the anger the love. It is all in music. We don’t need to separate ourselves into parts and labels.

My important influences are, first and foremost, Nordoff-Robbins, and the many writers that followed in their footsteps such as Gary Ansdell, Ken Aigen, David Aldridge, AlanTurry, to name a few. I also love the writing of Carolyn Kenny. Both Kenny and Clive Robbins gave me a foundation and permission to view music therapy in a way that made sense to me. On the psychological side, I like Jung and Frankl, and Maslow.

What I love about the creative process is the creation of the new. Suddenly, something is there that wasn’t there before; a new idea, a new song, a new person with a new way of being in the world. This has happened so many times, it’s incalculable. When some amazing breathtaking or dramatic moment of previously unseen healthy functioning emerges in music therapy, it seems to almost have little or nothing to do with all the preparation that may have led up to it: a non-verbal and almost mute client singing for the first time; a profoundly disoriented and isolated brain injury patient writing a stunning song that others can share; a shy teenager with autism giving an astonishingly confident and moving concert performance for family and friends…

These are just a few examples. These types of things are common but I do not take them for granted. It feels like such an honor to be present. To be witness to the indomitability of the human spirit is moving and inspiring always. To simply be willing to be there – to try this, try that – to attempt to make music with a client that seems like it might be the right kind of music for that client at that time; to be looking for it. The Buddha said, “When you dig a well, there’s no sign of water until you reach it, only rocks and dirt to move out of the way. You have removed enough; soon the pure water will flow.” This is the most essential skill of a music therapist: To know that something really special is possible and NEVER give up on that possibility.

There are so many clients who have inspired me; whose being and lessons will stay in my mind for my whole life. They are not people who tried to teach me something. They just did through their spirit and our connection. Viktor Frankl wrote:

This uniqueness and singleness which distinguishes each individual and gives a meaning to his existence has a bearing on creative work as much as it does on human love. When the impossibility of replacing a person is realized, it allows the responsibility which a man has for his existence and its continuance to appear in all its magnitude. A man who becomes conscious of the responsibility he bears

toward a human being who affectionately waits for him, or to an unfinished work, will never be able to throw away his life. He knows the “why” for his existence, and will be able to bear almost any “how.”

The worst thing that ever happened to me in music therapy was this: I was the director of the Creative Arts Therapy dept. at a brain injury facility and, with the collaboration of some wonderful colleagues, we built the dept. into a nationally recognized, incredible creative, extremely progressive and well functioning program. It was an amazing success story. The owner was a lover and supporter of the arts, and so paid all our salaries and provided the necessary supplies. Tragically, he suddenly passed away. In the struggle to take over the owner’s business, some people came into to power who did not recognize the importance of the arts and so, decimated the department. I was laid-off. It was beyond traumatic to have spent years giving my heart and soul to this organization and to have been so unimaginably successful in the job and then, just to be kicked to the curb like that. I vowed to never again give all my talent, ambition and passion for my work to help some company build up their reputation and then to be discarded if the administrative wind changes. So I started my own company in my community: Hudson Valley Creative Arts Therapy Studio. I’m doing pretty well.

Thanks so much Rick for being a part of our membership spotlight!

MAR-AMTA ·
@MARAMTA
We are looking for people or businesses to Exhibit, Sponsor, or Donate door prizes for our MAR-AMTA conference on March 9th-11th in Niagara Falls, NY!