“We Were Made For These Times”

I am writing this article just hours after our 45th president was sworn into office. The divisiveness surrounding this event and those leading up to it cannot be avoided. The uncertainty of the future direction of our country creates a sense of fear, anxiety, and panic. I recently read an article by Jungian psychotherapist and author Clarissa Pinkola Estes (http://www.grahameb.com/pinkola_estes.htm). She begins the article, “My friends, do not lose heart. We were made for these times.” She advises us not to focus our attention on “how much is wrong or unmended in the world” or to be” weakened by dwelling on what is outside our reach, by what cannot yet be.” Instead, she encourages any “small, calm thing that one soul can do to help another soul, to assist some portion of this poor suffering world.” She asserts that dramatic change happens with an accumulation of these acts. She encourages small, determined groups to continue this work and not give up. We do not know what the future holds, but as a small determined group of music therapists, we are made for these times!

Two states have already filed bills that include music therapy as a service provision:

You can now easily access legislation that mentions music therapy by visiting the state recognition map on the CBMT website: http://www.cbmt.org/advocacy/state-task-forces-map/. Last year, CBMT subscribed to a new state legislation alerting and tracking system called StateTrack (by CQ Roll Call). Widgets have been embedded into the map that shows music therapy-related legislation from the current and previous sessions.

You are invited to support this project by sharing, liking, commenting on, and retweeting blog posts and podcast episodes related to the project.

The national team monitors all variety of newspaper articles, opinion pieces, blog posts, TV segments, and other forms of media that reference music therapy. Please rest assured that the even though you may not see formal written responses from the national team, they are responding in ways that strategically support the state recognition operational plan. Please continue sharing this information with the national team.

The Delaware State Task Force continues to formalize, maintain relationships with legislators, and collect data about music therapy in the state. The Virginia State Task Force (vastfmt@gmail.com) will regroup in the spring/early summer. The West Virginia State Task Force (WestVirginiaSTF@gmail.com) submitted a Sunrise Review and continues to follow-up with the state. In December Dena Register, Amy Rodgers Smith and Kayla Holsclaw met with two representatives from the West Virginia Auditor’s office to review and further clarify the Sunrise Review.

Licensure Bill Update – There has been strong legislative interest and support for a Music Therapy Licensure Bill in MD. A draft bill is being vetted by CBMT legal counsel and the state. The task force recently hosted a Virtual Town Hall Meeting to update Maryland Music Therapists and to answer any questions regarding the bill. The task force will host a Hill Day in Annapolis, Maryland in early spring. Please plan on joining the task force for this important advocacy event.

Maryland State Task Force Facebook Page – The state task force has also increased their efforts in communicating with Maryland music therapists and students by creating a Maryland Music Therapy Facebook page. To follow government relations efforts in Maryland you can “like” the page at: https://www.facebook.com/groips/mamtgov/

The current legislative session in New Jersey runs until January of 2018. This means the current music therapy bills carryover from last session with the same bill numbers and the task force can build on the progress that was made from last year.

New Jersey Music Therapist Licensing Act, A783 – On November 21, 2016, A783 passed the vote in the General Assembly by a vote of 59 to 13. The bill currently has a total of 6 Primary Sponsors and 10 Co-Sponsors Click here to view the current bill: http://www.njleg.state.nj.us/bills/BillView.asp?BillNumber=A783).

Senate Budget and Appropriations Committee Vote – Both A783 and S1601 are waiting for a vote in the B&A Committee. The NJTSF maintains contact with this committee. More hearings are scheduled for January and February. Be on the lookout for information from the task force regarding a call-to-action for this vote and contact your legislators.

School Tours – the NYSTF has finished up with its school tours to educate New York Music Therapists about issues concerning the LCAT and the need to move toward an authentic music therapy license in the state. Between August 2015 and October 2016 the task force visited all 5 schools in New York.

Medicaid and Other Service Provisions and Reimbursement Concerns – The New York Reimbursement Team consisting of Anna Palumbo, Kimberly Leubner, Molly Pow, and Amy Myers will be working with Briana Priester, the Regional Reimbursement Representative and the task force to assist with concerns regarding Medicaid Reimbursement.

Mandatory Continuing Education Requirements for LCATs – effective January 1, 2017, Section 8412 of Article 163, the Mental Health Practitioner’s law, requires LCATs to earn 36 hours of approved continuing education (CE) for every 3-year registration period. All CE must be taken from a state-approved provider, and any CE completed prior to January 1, 2017 will not be accepted. For more information: http://mar-amta.org/2017/01/15/update-new-york-state-ce-requirements-for-the-lcat/

Music Therapy Licensing – The task force, in collaboration with AMTA, CBMT and Diana Georgia, New York’s legislative consultant, continues work on the creation of an authentic music therapy license in NYS. Bill language is drafted and bill sponsors are being secured.

Task Force Member Update – The task force and the region would like to thank Clare Arezina for her service to the NYSTF as she steps down. Thank you Clare for your service and technological savvy!

School Tours – The PASTF has been providing CMTE’s throughout PA at universities and colleges in PA. So far the task force has visited Temple University, Duquesne University, and Immaculata University. They are scheduled to visit Seton Hill University on February 18th from 2 PM – 5 PM, Drexel University on February 25th from 10 AM – 1 PM, and Marywood University in the spring of 2017. This 3 credit CMTE will include updates on the PA licensure bill and how it affects PA music therapists and music therapy practice in PA. It is open to both students (FREE!) and professionals ($40).  Click here to register: https://goo.gl/forms/urLq59E9JnBdzm2k2 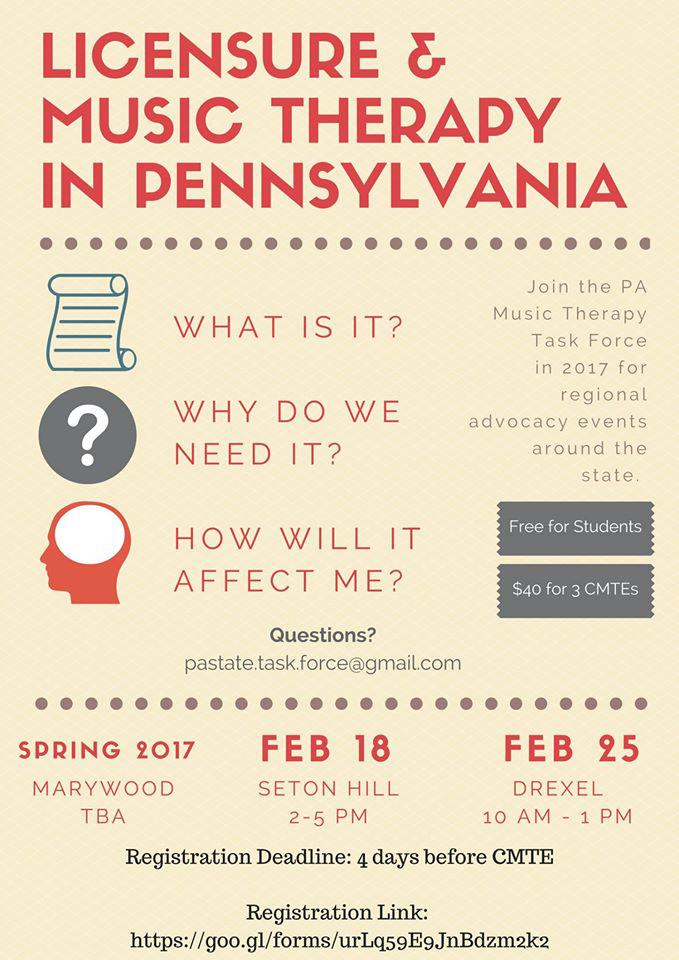 Music Therapy Rally – SAVE THE DATE! The task force is planning a rally in support of music therapy licensure at the Harrisburg Capitol Building in April 24, 2017. Watch for forthcoming details. Hope to see you in Harrisburg in March! 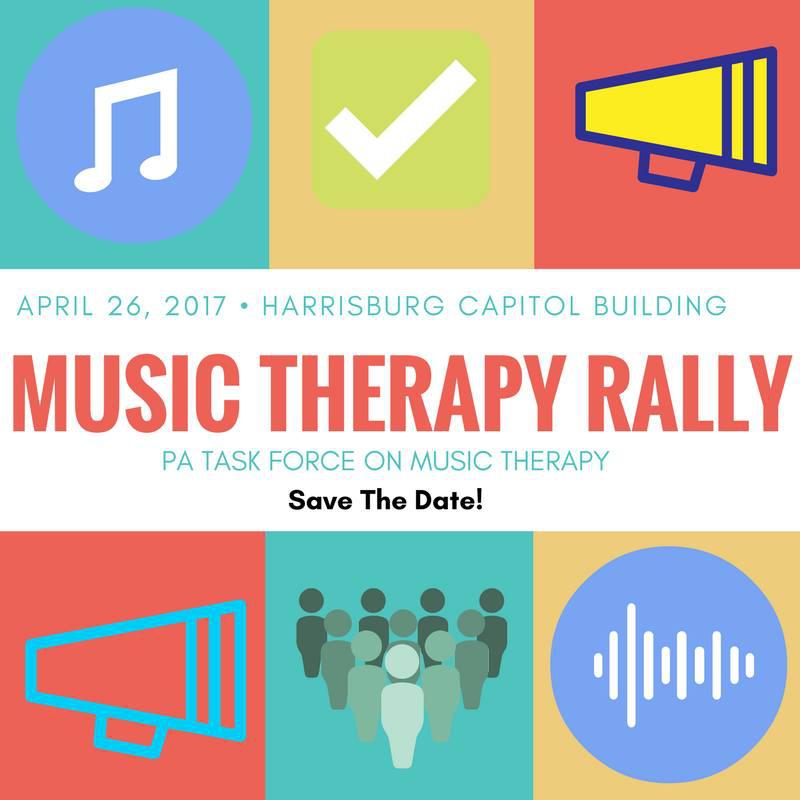 Open comment period ended January 17th. The task force sent out a call to action encouraging music therapists to write in support of the inclusion of music therapy in the waivers, as well as to ask for some changes in the music therapy portion of the waiver.

Task Force Members Update – The task force would like to welcome new student representative Madison Frank from Temple University. Welcome, Madison! The task force and the region would like to thank Jennifer Swanson for her service on the task force as she temporarily steps down due to her increased responsibilities with conference planning. Thank you Jennifer and good luck!