The 2016 American Music Therapy Association conference will be held at the Kalahari Resort in Sandusky, Ohio November 10-13, 2016. There are several state recognition-related events that will take place at this conference:

Maryland Advocacy Event – The MDSTF held a 3 hour CMTE on August 6, 2016 in Annapolis, MD. Thanks to CJ Shiloh for hosting the task force and participants and many thanks to AMTA and CBMT for assisting the MDSTF with the training. 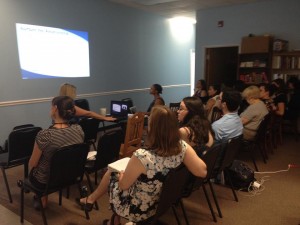 Legislative Interest – There has been tremendous legislative interest and support for a Music Therapy Licensure Bill in MD. The MDSTF recently sent out a survey to see if music therapists in MD were on board with legislator’s recommendations for a MD Music Therapy License. Sixty three MD Music Therapists completed the survey. Fifty nine music therapists were in support of the license. Two people would not support licensure and two people were undecided. Draft language for a bill is currently being drafted. The task force will be holding Town Hall Meetings in MD to answer questions from MD Music Therapists and to keep them informed of this process. Stay tuned!

Maryland State Task Force Facebook Page – The state task force has also increased their efforts in communicating with Maryland music therapists and students by creating a Maryland Music Therapy Facebook page. To follow government relations efforts in Maryland you can “like” the page at: https://www.facebook.com/groips/mamtgov/

New Jersey Senate Music Therapy Hill Day was held August 1, 2016 in Trenton. The New Jersey State Task Force (NJSTF) members contacted over half of the state’s Senators to request meetings to garner support for S1601, The Music Therapist Licensing Act. Tight scheduling of Senate business and illness reduced the opportunities to only 2 meetings and no spontaneous meetings held, but, just the process of contacting all those Senators prior to Hill Day resulted in new sponsors, as well as a change in willingness to meet in district offices. Thus members of NJSTF had four additional meetings in local offices within a week and a half following Hill Day and additional meetings in September. Many thanks to Paula Unsal, Barbara Giaquinto, Julie Abrams, Brian Abrams, L. Elise Carter, Amanda Latham, Marlea Gruver, and Hermine Bartee for taking the time to schedule and participate in these visits. Your advocacy truly made a difference! 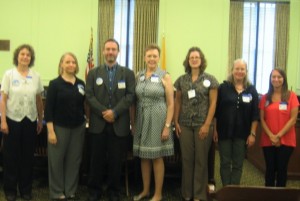 S1601 released from the Senate Commerce Committee! A win for NJ!- On Monday, September 26, 2016, Paula Unsal, NJSTF Chair, Brian Abrams, NJSTF Consulting Member, Amanda Latham, NJSTF Member, and Stephanie Carr, from ArtPrideNJ, testified in support of S1601 before the Senate Commerce Committee. The vote was as anticipated: 5 to 1 in favor of the bill. Many additional New Jersey Music Therapists attended in support: Marlea Gruver, Sheila Riley-Massa, Hermine Bartee, Virginia Eulacio, Margot Gatenby, Amy Clarkson, and Roia Rafieyan. Next step is the Budget and Appropriations Committee and a vote in the General Assembly. 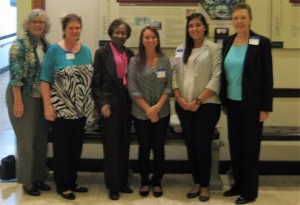 NYSTF Coming to Your School – With the pre-approved CMTE having already been provided at NYU, SUNY New Paltz, Fredonia, and Nazareth College, the task force has one final stop in its school tour: Molloy College on Friday, October 21, 2016. David Hamilton, PhD, LMSW, Executive Secretary of NYS Board for Mental Health Practioners and Diana Georgia, Esq., The Elk Street Group will join the task force, AMTA and CBMT in presenting. Click here for more information and to register:  https://docs.google.com/…/1FAIpQLSfV-yF5C7aGWlka7w…/viewform

Medicaid and Other Service Provision and Reimbursement Concerns – The NYSTF created a Reimbursement Team. Anna Palumbo, Kimberly Leubner, Molly Pow, and Amy Myers will be working with the task force and Briana Preister, the Regional Reimbursement Representative, to assist with concerns in NY with Medicaid Reimbursement.

Mandatory Continuing Education Requirements for LCATs – Now required by law and specified in regulation, LCATs must now accrue 36 hours of continuing education (CE) during every 3-year registration period, effective January 1, 2017. These CE hours must be earned through state-approved providers. The Mid-Atlantic Region is looking into becoming a state-approved provider for the LCAT. Stay tuned for more forthcoming news.

Music Therapy Licensing – The task force, in collaboration with AMTA, CBMT and Diana Georgia, New York’s legislative consultant, continues work on the creation of an authentic music therapy license in NYS. Bill language is drafted. The task force will soon be activating the Advocacy Support Network.

NYSTF and Regional Conference – The task force will provide many opportunities at the regional conference in Rochester to stay up-to-date with all the activity that is happening in NY. Stay tuned!

School Tours – The PASTF has been providing CMTE’s throughout PA at universities and colleges in PA. So far the task force has visited Temple University on September 24th and Duquesne University on October 1st. The next stop will be Immaculata University on October 15th.  These meetings have allowed for fruitful discussion and education. This 3 credit CMTE will include updates on the PA licensure bill and how it affects you and your practice as a Pennsylvania Music Therapist. Click here for more information: http://mar-amta.org/2016/09/07/attention-pa-music-therapists/. It is open to both students (FREE!) and professionals ($40). This is a great opportunity to connect with fellow MTs across the state and learn about this important issue that will affect music therapy practice in PA. The task force is also setting up additional times at other university across the state….stay tuned for more details!

Music Therapy Licensure Bills – The task force continues to work with sponsors of the bills to move them forward. More news will be forthcoming after elections.

Stay Connected in PA – If you are a resident of PA, stay connected to the task force through the monthly E-Newsletter by signing-up here: http://facebook.us11.list-manage2.com/subscribe?u=df6a823557112e698c163a446&id=ea44d5c2aa. You can also “like” the PA Task Force on FB to receive updates on our advocacy work in PA: https://www.facebook.com/MTPASTF/.

VA Advocacy Blog – The Virginia state task force developed a blog as a home base for sharing information, updates, and calls to action across the state. You can find it at https://vastfmusictherapy.wordpress.com

Sunrise Review – The WVSTF worked hard this summer to complete a Sunrise Review for their state. Thank you to Amy Rodgers Smith and the national team (Dena Register, Judy Simpson, and Kimberly Sena Moore) for completing this rather arduous document!